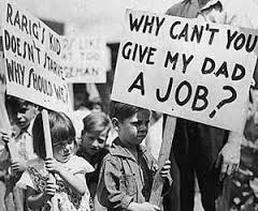 The Great Depression was a time in our history where millions of American citizens were out of work and the economy was continually getting worse and worse.  It began when the economy went into a recession in the summer of 1929.  Soon after, in October, the stock market crashed.  People had been investing very large sums of money into stocks that were predicted to be successful and when they weren't, many investors lost most of their money.  When the stock market crashed, that caused people to become more wary of their spending.  People stopped buying things and stores stopped making money.  People also began to withdraw all of their money from the bank in large amounts, but the problem was, the banks didn't have enough cash to give to the people.  The money wasn't insured so there was no guarantee of getting all or even some of your money back.  Many banks shut down and with that, many people never got their money back.
By 1930, four million Americans were out of work and in just one year, that number had risen by two million.  People were beginning to panic because there was no sign of any change in the economy.  During this time, the President of America was Herbert Hoover.  He was not making any drastic changes to try and combat the worsening economy, instead he insisted that it was just a normal recession and it would run its course.  When it came time to elect a new president, Franklin D. Roosevelt won by a large margin.  Unlike Hoover, FDR believed that the government need to have an active role in the economy and it was their responsibility to ensure that the citizens of America were working and were making enough money to live off of.  The economy gradually improved all through Roosevelt's time in office but it wasn't until the U.S. joined in World War II that it became close to normal.  When the soldiers went overseas to fight in the war it created opportunities for women to work outside of the home.  Also, because the country was in a war, lots of jobs were created making tanks and weapons to send overseas.