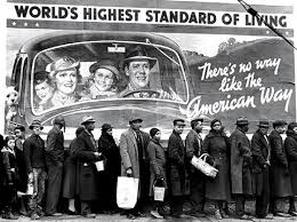 The American dream is a phrase that was coined in the 1930's during the Great Depression, but even before the  phrase became commonly used, the idea behind it was known all over the world.  The American dream represents the idea that in the U.S. anyone is free to pursue success and with hard work and perseverance, anyone can make a better life for themselves and their children.  It has evolved throughout the years and now the American dream is commonly thought of as owning a house or land and having enough money to send one's children to college and to retire comfortably.  Although there are many interpretations of the meaning of the American dream, they are all centered around the common theme that in America, people can make their own wealth and work for their own success and a better life.
In Of Mice and Men by John Steinbeck, the American dream is a recurring theme.  George has alway dreamed of owning his own land and harvesting his own crops instead of traveling from farm to farm with only ten dollars in his pocket.  This was a popular dream at the time.  During the Great Depression, millions of people lost their jobs, their money and their homes.  All they wanted was somewhere to call their own and a way to support themselves and their family.  Lennie had a simpler dream.  He wanted to tend his own rabbits.  This shows how much simpler the world was to Lennie.  He wasn't concerned with money or work, he just wanted rabbits to call his own.  Curley's wife also has a dream.  Instead of being the wife of a farmer's son she wants to be a movie star in Hollywood.  This is still a common dream for people all over the world.  Crooks was the stable hand at the farm that Lennie and George worked at.  He had a dream similar to George except instead of wanting to earn his own land all he wanted to do was work for his keep.  Crooks was African American and at that time if you weren't white then that really effected how you were treated and your oppurtunities in life.  He was forced to sleep in the barn alone and he wanted to live with people and earn his keep.  Throughout the story the characters talk about their dreams showing that the American dream was as common as it is today.
Powered by