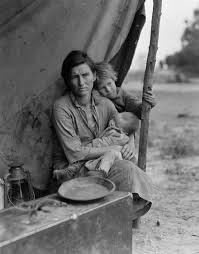 During the 1930's the place for a woman was in the home taking care of her children and husband, cooking and cleaning.  When the Great Depression struck America that cut many people's income or completely put them out of work.  This caused issues at home because there wasn't enough money to buy food or pay insurance and sometimes that meant one's house was foreclosed.  If a woman was married with children, her job was to work as hard as she could to make do with the resources she had available to put dinner on the table for her family and to put clothes on their back.  There were many tricks for housewives during the Great Depression that made food stretch a little farther and made finding material for clothes easier.  An example of this is sometimes women would make dresses out of chicken feed bags if they couldn't afford to buy a dress or material for a dress.
If a woman was not married or widowed during the Great Depression that made things much harder for her.  It was harder for women than men to find work because people had the mindset that men were more deserving of the jobs.  At one point during the Great Depression, women were being used as a sort of scapegoat.  If a woman was working as a teacher or a secretary or any other job, people were told to fire the woman and hire a man because men deserved jobs more.  In the book Of Mice and Men, Curley's wife isn't in the position where she needs to find a job but she is in a position that many married women were in during that time period.  Women were seen as the property of their husbands and they had to take care of them and do their bidding.  Curley didn't let his wife leave the farm or talk to the other men working there and she was frustrated with it.  Because she was a woman, she had limited freedoms.  When America joined World War II that not only created jobs for many men but it also broke down the standards of women.  Women started working in factories and other places that were typically a man's workplace.  When the war ended and the soldiers came home, the women were already working their jobs and from then it was much more acceptable for a woman to hold a job.
Powered by