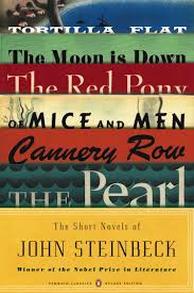 John Steinbeck was born on February 27th, 1902.  He grew up in Salinas, California.  His father was the manager of a flour company, a job he eventually lost when Steinbeck was a teenager, he then became the Monterey County treasurer.  Steinbeck's mother was a teacher.  From an early age Steinbeck showed an interest in reading and writing.  When he was nine he was given a copy of Le Morte d'Arthur and from then on he was hooked on old literature,  When he entered high school he began to show a strong interest in writing and after high school he went to Stanford and majored in English.  He left college in 1925 without a degree.  After college Steinbeck worked a variety of jobs, and throughout all of them he continued to write.  He finished his first novel, Cup of Gold, in 1929 and in January of 1930 he married Carol Henning.  The 1930's brought more success to Steinbeck.  Pastures of Heaven, To a God Unknown, and The Red Pony Stories were published and became mildly popular.  He continued to write and his books Of Mice and Men, In Dubious Battle, and The Grapes of Wrath were released later in the 1930's.
Many of Steinbeck's books were set in California and a lot of the time, Salinas, California where he grew up.  His books were inspired by things from his childhood and life in California.  His book, The Red Pony Stories was inspired by a pony he had as a child and the settings of many of his books reflect places he lived in or has been in California.  In 1951 Steinbeck and Carol Henning divorced and he remarried to Gwendolyn Conger.  During World War II Steinbeck was hired by the New York Herald Tribune to report on the war in Europe.  He continued to write and publish books throughout the 40's and 50's and in 1962 he was awarded the Nobel Prize for literature.  He died in his home in December of 1968.
Powered by