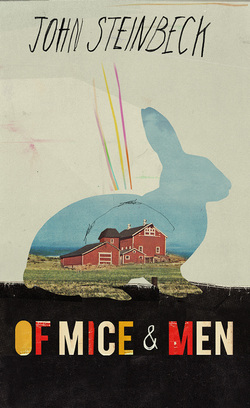 Of Mice and Men by John Steinbeck tells the tale of two men during the great depression living and working in Salinas Valley, California.  George and Lennie, the two main characters of the story travel together and find work on different farms, harvesting whatever crop is in season.  Lennie has a mental illness and George looks after him and keeps him safe.  Despite Lennie's mental illness he is very strong, much stronger than many of the men they work with on farms.  He doesn't know his own strength and he has a history of accidentally killing mice.  Throughout the book he kills a puppy and a woman, both unintentionally.
George has the dream of owning his own land and farming his own crops.  Throughout the book he talks about the plot of land and house he will buy when he has saved up enough.  Lennie's dream is much simpler.  He wants to have rainbow colored rabbits that he can take care of by himself.  Lennie loves to pet soft things and that is how he killed the puppy, mice and the woman.  He will accidentally hold on too tight or pet too hard because he doesn't realize how strong he actually his.  Lennie's strength does get him into trouble when he accidentally kills the wife of the boss's son.  There is nothing George can do to help Lennie escape the punishment for murder so he has to be shot.  Throughout the book Lennie's strength is one of the big themes and in the end he proves to be to strong for his own good.